Early 2017, hearing about Pygmy cave from Howard and Deb, the leaders of British Caving Research Association (BCRA), I was definitely thirsty for this amazing cave after seeing the photos. I talked to Howard and Deb about the story of this huge cave system.

Howard said “We found this cave system in 1997, 20 years ago”. Oh my god, 20 years ago. That was the very first few years when the BCAR cavers put their steps in Phong Nha to start looking for caves.

After looking at the survey map of the hang Vom cave system, the Tiger cave, hang Over cave and Pygmy cave are easily found. It is a series of three continuous section of one cave, I believed. Reading more about the details of cave descriptions, it’s clear that this system used to be one cave which has been divided into three with a doline known as collapse in between.

After being agreed by the Phong Nha – Ke Bang National management board on the survey, I found my team to start the journey of bring one of the largest cave to the world. An expedition team was formed including me as the leader, two national park staffs, and three local porters.

June, 2017, we started our first journey to find the fourth largest cave. After a long full day of hiking through the untouched jungle of Phong Nha – Ke Bang, the map from BCRA sent us to the lower entrance of Tiger cave known as Dai A cave. Exhausted! the whole team decided to camp at Dai A, the lower entrance of Tiger cave. Campsite was set, food prepared by my local team to get ready for a big adventure ahead. Mapping  the area, we recognized that we were very closed to hang Over which is the middle section of this cave system. We planned to explore the whole length of hang Over which is 3,2 km in the next morning to get to Pygmy cave. Good plan!, we said to each other.

Second day start with a big breakfast and some packed lunch were ready. We left the Dai A camp for hang Over exploration. After 30 minutes walk, we found the upper entrance of Tiger cave which is 100m from hang Over. We were in the jungle between two entrances of caves. That was the doline or jungle inside the cave. We could not believe this! The collapse is huge, 100m wide, 150m high. A short exploration of Tiger cave was done until we hit the water section. Continue through the jungle in the cave, we reached the entrance of hang Over cave. Now, the adventure started.

Exited the whole team was! “Wow this cave is amazing” one of the porter said. Setting up caving gears, we started the journey though 3,2-km-long-cave with a hope of finding other exit. Trekking through the mud in darkness was a challenge for everyone. Sometimes, we had to scramble over boulders and walk into cave pools. Slippery, wet and dark cave. Two hours of walking, no one could see any daylight. Kept walking for 30 minutes, I said to one of crew “I was here”.  “Not possible” he said. I showed him my footprints and the photos I took 30 minutes before. Everyone was surprised that we were lost for 30 minutes. That was “Massive Attack Passage”. This passage is 125 m wide. Too big to imagine where we are. The crew started getting exhausted after a long walk through the slippery and muddy cave. The hope was lost. We had to divided the crew into three small groups and started looking for different sections of this massive cave.  Time went by, no daylight was seen, batteries were going to dead. I had to make the decision as we could not just walking around in a huge cave to find the way out. The final decision was made that we had to turn around before the batteries run out. 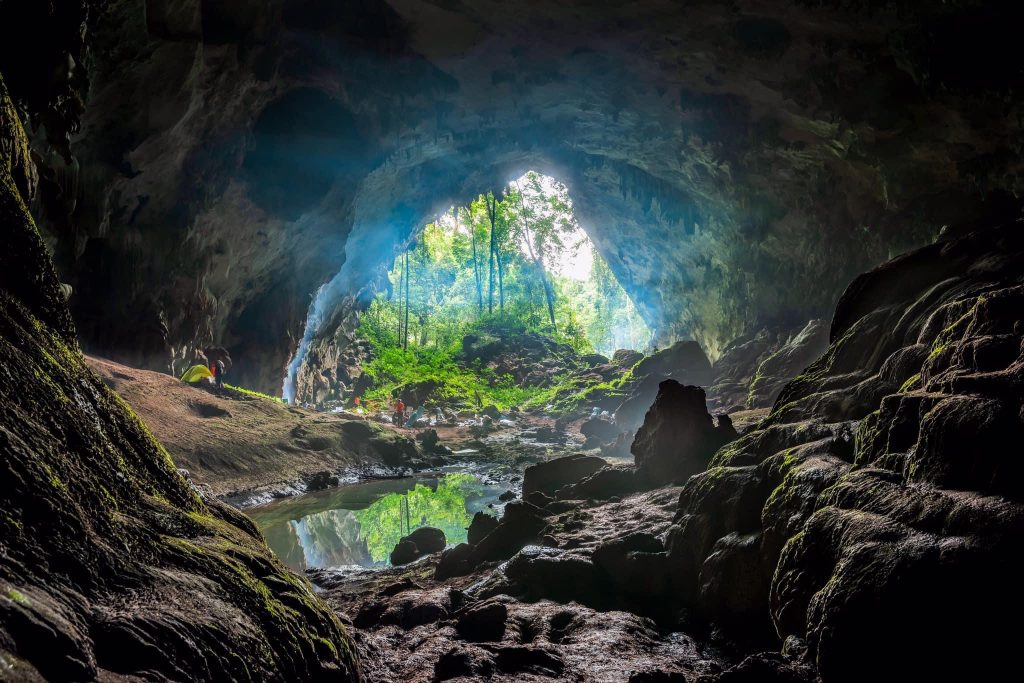 Turning around after hours of trying to look for tropical wind exit, the crew was super upset, but it was the right decision to keep us safe.

We decided to continue the trip to find the other exit of hang Over from other side of the cave which is 4 hours trek through a crazy terrains. Time went by, we followed a rocky river bed, climbed up many hills, trekked through valleys to hit to a top of mountain that we did not plan to reach. Suddenly, we saw a hug collapse which looks like a cave entrance. We could not believe that we were on the top of a doline known as a cave ceiling collapse. It was scary, but we had no choice. Reaching the bottom of the doline, we found out that was the jungle inside hang Pygmy and hang Over. We were in a jungle inside a cave. How amazing it was! We were very closed to the exit of hang Over which is hidden somewhere in the collapse. No chance to find that hidden exit, we decided to go through hang Pygmy and keep our expedition going. Then, going through 800m of hang Pygmy which was a challenge for us as there were some vertical drops on the way. We had to use the string left by the Ruc Caroong minority people to go down a 15m drop of Dinosaur spike. Which was scary, but great adventure!. A quick lunch at the entrance of Pygmy cave to recharge the energy for another long trek to Ruc Caroong cave where our campsite was. Hitting the entrance of Ruc Caroong cave where our campsite was when it was dark, the crew was supper exhausted. Laying down in the river of khe Tum to cool down and refresh. We set up the campsite and dinner for the lats night of the trip. Thinking of the exit of hang Over, we planed for the next trip to find that hidden hole.